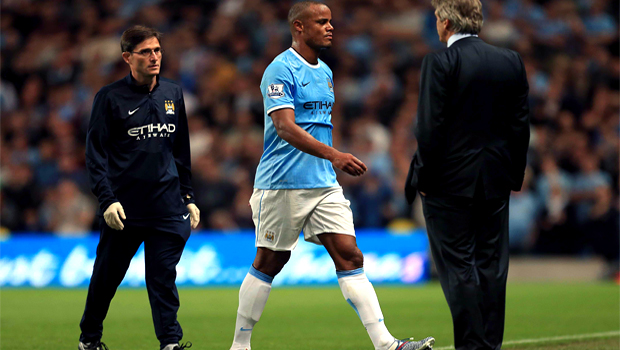 Manchester City skipper Vincent Kompany will have to undergo tests with the club medical staff to assess the severity of his injury sustained against Newcastle in the 4-0 win.

Kompany was forced to limp off at the Etihad after seemingly aggravating a groin injury during an innocuous challenge with Sammy Ameobi on 71 minutes.

The Belgian international had already played a key role in helping his side open up a healthy advantage against the 10 men of Newcastle.

The 27-year-old orchestrated the move which led to the second goal after making a strong challenge in defence and then moving the ball down field quickly to Edin Dzeko who in turn played Sergio Aguero through on goal.

The Citizens entered the game already without young central defender Matija Nastasic who was unavailable due to an ankle injury which is expected to sideline him for a number of weeks.

Boss Manuel Pellegrini insists he may be forced to dip into the transfer market and add to the £90million already spent this summer if his captain is out for a sustained period.

Pellegrini said: “The doctor will see exactly what he has, but maybe we can think about another centre-back.”

Javi Garcia was brought on as a replacement in the opening league fixture of the campaign, playing alongside Joleon Lescott in the heart of the defence.

The 2011-12 Premier League champions allowed Kolo Toure to leave on a free to Liverpool in the summer leaving defensive options scarce although Micah Richards and Dedryck Boyata both remain available for selection.

Kompany remained positive after the game as he waits to hear back on the results of his tests.

He tweeted: “Injury is a blow after all the hard work. I’ll be back to that level in no time. Thanks for all the support.”