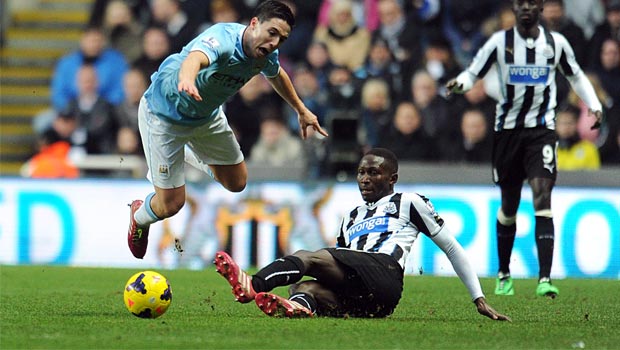 Manchester City continued their challenge for the Premier League title with a 2-0 win at Newcastle, but it came at a cost as Samir Nasri picked up a serious knee injury.

City moved back to the top of the table thanks to goals from Edin Dzeko and Alvaro Negredo but the shine was taken off the win as Nasri was stretchered off with 15 minutes remaining.

The Frenchman was on the receiving end of a strong tackle from Mapou Yanga-Mbiwa that left Manuel Pellegrini fuming and calling for a red card to be show.

The Newcastle star escaped and City are now left waiting to hear how long the influential Nasri will be on the sidelines.

“It’s very serious. It was a very unfair kick and the player of Newcastle, it was directly a red card. I don’t understand why he was not sent off,” Pellegrini said.

“It’s his medial ligament. We will see tomorrow how serious it is, but I don’t think it’s a light thing, I think it’s a serious injury.”

Meanwhile, Pellegrini was delighted with the win against a Newcastle side that have proven to be tough opponents this season.

“It was a very big result because it’s a very difficult stadium to play here,” he added.

“We, Chelsea and Manchester United know how difficult it is to play Newcastle.

“They have a direct style with a lot of physical power, and the whole game, they were trying to score with crosses and shooting, and we were very concentrated in defending.

“Also, we scored two goals and we had two or three more clear chances to do it.”

Arsenal can go back top with a win at Aston Villa on Monday evening but City still remain favourites to win back the Premier League crown they lost to Manchester United last season.