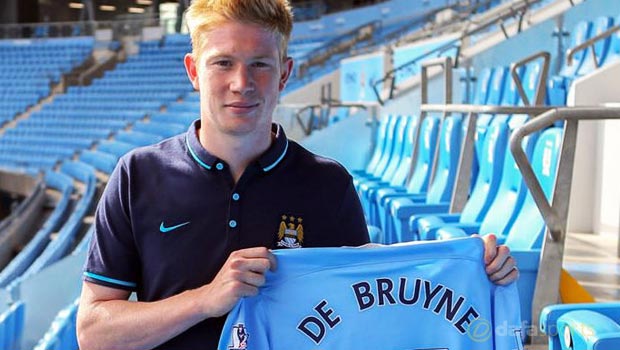 The winger was at Chelsea previously but failed to win a regular starting spot and was allowed to leave Stamford Bridge to joined Bundesliga outfit Wolfsburg in January 2014.

The 24-year-old was hugely impressive and quickly became a target for Europe’s leading clubs this summer.

In recent weeks it was City that emerged as his most likely destination despite Wolfsburg’s best efforts to keep him happy.

Having become City’s record signing for £54million, De Bruyne has revealed his new skipper was a persuasive figure in helping him decide to return to English football.

“He called me a couple of times and we spoke on the phone,” he said. “He told me that the club can take good care of me and they will help me, and said to follow your heart and mind and if you come to City I will be happy.

“It is always nice when you have some familiar faces. I know Vinnie really well. He can help me settle in a little bit better.”

De Bruyne made only two Premier League starts during his short stay at Chelsea and while he faces stiff competition for a starting place in City’s midfield, he feels he is now more prepared for the challenge.

“It is now something I need in my career,” he added. “A few years ago I was a young player and just wanted to play. When I came to Wolfsburg I had to fight my way into the team.”

After winning their first four games without conceding a goal, Manchester City are now 1.50 to win the Premier League this season. Chelsea are 5.50 to successfully defend their title.