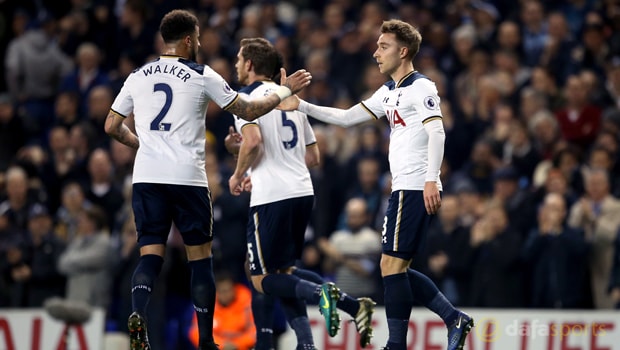 Christian Eriksen insists Tottenham have always believed they can mount a serious challenge for Premier
League glory this season.

Spurs remained in the hunt for top-flight success until the final few weeks of the 2015-16 campaign before eventually finishing third, while doubts began to surface over whether they could maintain a serious challenge this term, particularly as they endured a run of one win in six matches during the autumn.

Denmark international Eriksen insists his side have always maintained their belief that they can challenge for overall glory, and he believes that has been proven by their recent four-match winning run.

“I don’t think [the confidence] has ever been gone really,” he said.

“I think it has been how people looked at it from the outside, saying: ‘Oh they don’t look as good as last season,’ but nothing has really changed.

“It’s still the same players, the same style of play, and some of the games we have maybe been in even more control than last season.”

Eriksen is one of a number of Tottenham players to have signed new contracts with the club over recent months, and he believes that shows how strong morale is within the squad.

“Everybody is happy to be here, otherwise it wouldn’t be the whole squad signing new deals, which says a lot about the whole club, the manager, your team mates, that everybody wants to be here and be a part of this,” Eriksen added.

“So hopefully there will be some very good years.” Tottenham are currently fourth in the league standings, ten points behind leaders Chelsea, who they will face in their next match at White Hart Lane on Wednesday.

Spurs have not claimed top-flight glory since 1961, and they are priced at 23.00 to end that title drought come the end of the season.