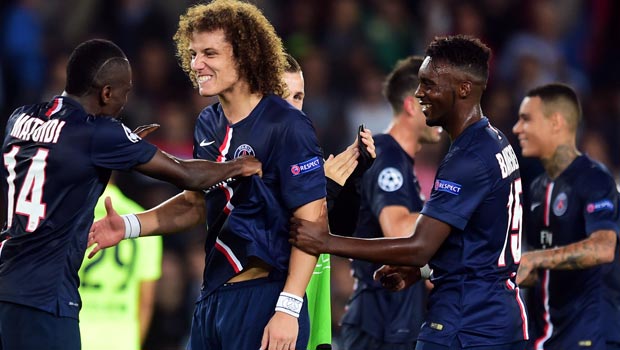 Chelsea are pleased to have been given the chance to play Paris Saint-Germain again after being drawn to face last season’s French champions in the last 16 of the Champions League.

Jose Mourinho’s side, who topped their group after taking 14 points from their six matches, beat PSG on away goals in the quarter-finals last season.

Chelsea won the second leg at Stamford Bridge 2-0 after losing the first encounter in the French capital 3-1, before being knocked out in the semi-finals by Atletico Madrid.

The Blues will be coming up against David Luiz, who they sold to PSG for a reported £40million in the summer, and club secretary David Barnard was pleased with the draw.

He said: “PSG are known to us as we played them in the quarters last year and they’ve got David Luiz, who is fondly remembered by us, playing for them too. All the teams in the draw are there by merit and PSG are no exception.”

Meanwhile, Arsenal have been drawn against Arsene Wenger’s former club, Monaco, who qualified for the last-16 as group winners despite only scoring four goals in their six matches.

They finished second in Ligue 1 last season but that team was broken up in the summer with the likes of Radamel Falcao, James Rodriguez and Emmanuel Riviere leaving for pastures new.

They are currently sixth in their domestic league.

Chelsea are 7.00 to win the Champions League this season while Real Madrid can be backed at 4.00 to win the competition for the second year in a row.