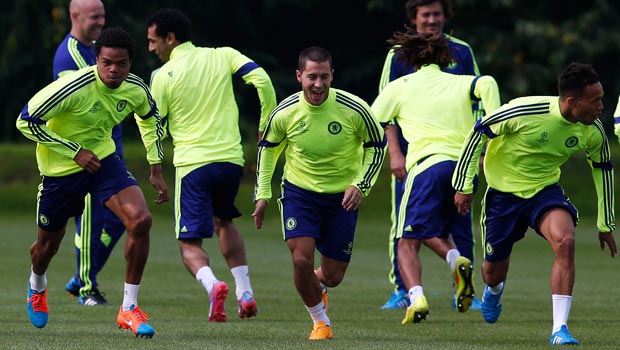 Chelsea star Eden Hazard has again played down rumours he could join Paris Saint-Germain but remains open to a return to France one day with former club Lille.

The Belgium international has been heavily linked with a move to the French champions since the end of last season after reports of differences with Blues boss Jose Mourinho.

However, Hazard has insisted on several occasions that he is not interested in joining PSG and is more than happy at Chelsea.

The 23-year-old has once again distanced himself from talk of a move to the big-spending French giants but has admitted he may be tempted to return to Les Dogues’ colours in the future.

He told Canal+: “When I left Lille, I wanted to leave France. I couldn’t join PSG. Every year I’m their priority, but I want to grow at Chelsea.

“Never say never. But if I were to return to Ligue 1, it will be with Lille, the team that I support and still love.”

Hazard is set to feature for Chelsea in their Champions League clash away at Sporting on Tuesday night, although he could be dropped to the bench.

Chelsea need to win after drawing their opening Group G clash at home to Schalke while Sporting are unbeaten this season, having picked up a point on their travels against Maribor on matchday one.

Mourinho’s men are 1.70 favourites to win in Lisbon while Sporting are 4.98 to take three points, with the draw available to back at 3.56 in the 1X2 betting.

Sporting have drawn five of their seven competitive matches this season 1-1, a score that Chelsea have also managed recently against both Schalke and Manchester City, and that can be backed at 7.00 in the Correct Score market.