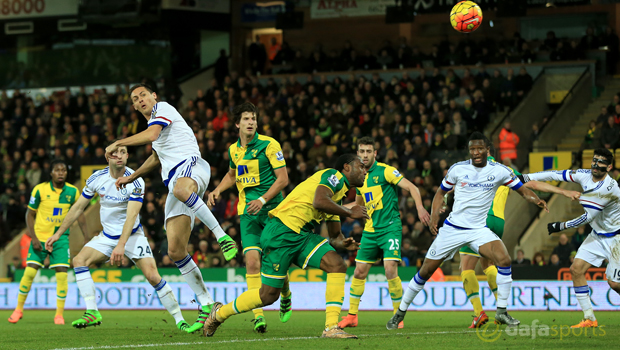 Nemanja Matic believes Chelsea can finish in a European position this season, although the midfielder believes the Blues will need to win their final 10 Premier League games to achieve this goal.

The defending champions climbed into the top half of the table thanks to a 2-1 victory away at struggling Norwich City, who have dropped into the bottom three, on Tuesday night.

Kenedy opened the scoring inside the first minute before Spain international Diego Costa tucked away a second right on the stroke of half-time, although replays showed the striker was offside.

Nathan Redmond gave the Canaries a glimmer of hope when pulling one back in the 68th minute but it was not enough as Alex Neil’s men slipped into the relegation zone.

The Blues are still unbeaten in the league since Guus Hiddink took charge on December 19 and the club still have an outside chance of sneaking into a Europa League spot.

Matic, who has received some criticism for his performances this season, is eyeing up the full 30 points available for the remainder of the campaign and the Serbian insists his side can reach this target.

“I think we can be in the first six, but we will try to win every game. I know it’s difficult, maybe impossible, but in football anything can happen,” he told Chelsea TV. “We will go game by game, step by step, and we will see in the end where we finish in the league.”

Chelsea are back in action on Saturday when they welcome Stoke City to Stamford Bridge and the hosts are 1.53 favourites to clinch all three points, a draw is priced at 4.00 while the visitors are 6.00 outsiders.

The Potters won the reverse fixture 1-0 back in November and will be looking to complete the league double over the Blues for the first time since 1974.