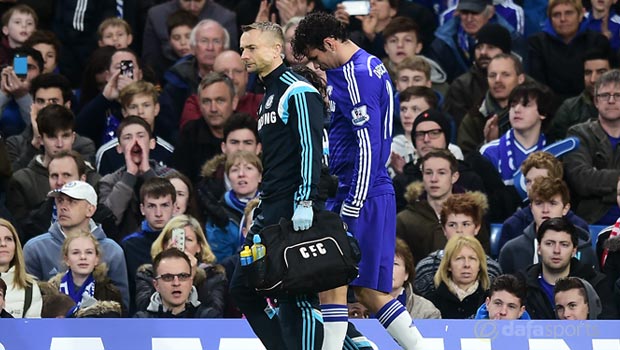 Chelsea manager Jose Mourinho has been forced to defend his decision to use Diego Costa against Stoke on Saturday after the striker suffered a recurrence of his hamstring injury.

The former Atletico Madrid man was a doubt for the visit of the Potters having picked up a hamstring problem in the last game before the international break against Hull, forcing him to miss Spain’s matches with Ukraine and the Netherlands.

Despite his fitness concerns, Mourinho took the decision to start Costa on the bench for Saturday’s evening kick-off at Stamford Bridge before introducing him at half-time with the score 1-1.

The move backfired badly as the 26-year-old pulled up after 10 minutes before being replaced by Didier Drogba.

While Chelsea were able to go on and win the game 2-1 to move seven points clear at the top of the Premier League, all the talk after the match was about Costa’s injury.

Mourinho expects to be without his top scorer for at least the next two weeks, meaning he is likely to miss the games against QPR and Manchester United.

“But no way am I upset with my medical department and I am not unhappy with the will of the player to try and help the team.

“From all the scans two days ago, the muscle and image was completely clean. The player trained twice at 100%. He did much more in training than he did in the match.

“The medical department do fantastic things for us. We will wait for Diego again. Next week Loic [Remy] or Didier [Drogba] will play.”

Chelsea are 1.04 to go on to win this season’s Premier League title, with second-place Arsenal 21.00.