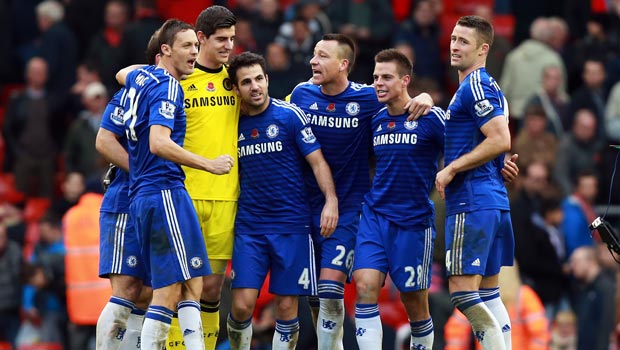 Thibaut Courtois says Chelsea fully expect teams to set up defensively against them this season following a frustrating draw at Sunderland on Saturday.

The Premier League leaders were held 0-0 at the Stadium of Light as the Black Cats put in a resilient defensive display to shut them out.

Gus Poyet’s side defended with 10 men behind the ball for almost the entire game and reduced Chelsea to long shots, with only five of their 24 attempts on goal coming from inside the penalty area.

It was a frustrating night for Jose Mourinho who said “only one team wanted to win” after the game, despite Sunderland missing chances late on.

Courtois says Chelsea, who remain unbeaten this season, are aware teams will set up to defend against them and so must work harder to find space in dangerous areas.

“It is normal for teams to defend against us and I think that will continue,” said the Belgian goalkeeper. “If you score early then you know they have to come at you and there will be more space, but we couldn’t do that and it was a difficult match.

“Sunderland were defending with 10 players behind the ball and just one striker up front. We couldn’t find the spaces in behind and after that it was more shots from distance, but in the end a point isn’t bad.”

Chelsea face London rivals Tottenham Hotspur at Stamford Bridge on Wednesday evening looking to extend their lead at the top of the table.

“Now we have an important week with two difficult games; first the derby against Tottenham in front of our own fans and then we go to Newcastle, which will be tough,” added Courtois.

“It’s an important month and we will try to win as many games as we can.”

Chelsea are 1.41 to beat Spurs and 1.55 to claim all three points away at Newcastle on Saturday.