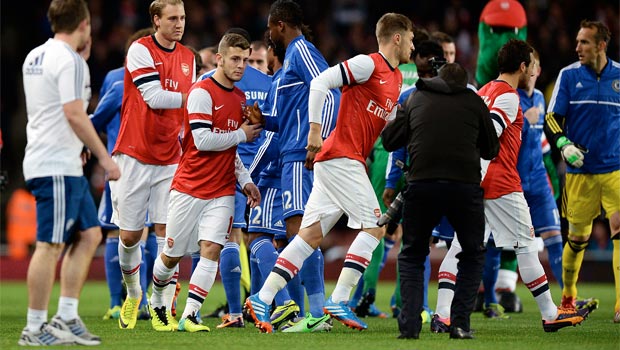 Chelsea’s rich vein of form has seen them move within four points of Arsenal at the top of the Premier League with a December 23 showdown on the horizon.

Ahead of that trip to the Emirates just two days before Christmas, Jose Mourinho’s side will bid to keep the momentum going against Sunderland after last Saturday’s 3-1 home win over Southampton – a sixth home success from seven fixtures this season and one that extended their Portuguese boss’ undefeated Premier League run at Stamford Bridge to a remarkable 67 games.

The fixture list has been kind to the Blues who will expect to take maximum points from their next three opponents as, after Wednesday night’s trip to Sunderland, they face Stoke and Crystal Palace, while Arsenal face Hull and Everton at home before a tough trip to Manchester City.

City themselves are right behind in third at present ahead of the midweek programme and so Arsene Wenger knows he cannot let his side ease off with the chasing pack not far behind.

He will be all too well aware that their London rivals, for whom John Terry has been in great form, pose the biggest threat at present.
Terry, a stalwart of 400 league appearances for Chelsea and 593 in all competitions, has scored some important goals in his time at the club, and just recently made it 57 in total by contributing in the win over Southampton.

At nearly 33 years of age he is still an important cog in Mourinho’s defensive wheel and is happy with the way things have gone so far this season.

“I’m delighted that the team are playing well, my form’s very good. I can chip in with a couple of goals,” said Terry.

“Ideally I’d like to be sitting top of the league. I feel as though it will come and we’ll get better and better.”

One slight drawback for Chelsea is that they will be without Oscar for a spell as the Brazilian midfielder picked up an ankle injury in the win over Southampton, but other than that and the continued absence of Samuel Eto’o, things are going well as Chelsea chase a fourth Premier League title.