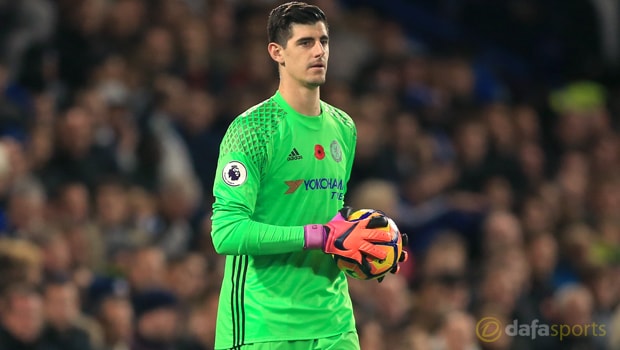 Chelsea goalkeeper Thibaut Courtois has urged his side to fight until the very end as they try to win the Premier League title this season.

The Blues, 3.60 to lift the title, currently sit second in the league table after a impressive run since the end of September.

Antonio Conte’s men were humbled 3-0 by Arsenal away from home on September 24 but have gone on to win their last five league games.

Hull City, Leicester City, Manchester United, Southampton and Everton have all been defeated and Chelsea have scored 16 goals in the process. The run has given some fans hope of a title charge.

However, Courtois insists his side need to work hard until the last game of the season.

He told Sky Sports News HQ: “We could be title contenders but after last season we have to be careful about everything.

“We cannot relax because maybe last year we went too easy into the season because we were champions the year before.

We have to keep the focus, ambition and hunger to win and, if we keep that, then maybe in May we can lift that trophy.

“The clean sheets are nice but, apart from against Leicester and Manchester United, I didn’t have too much work to do. That’s part of the teamwork.

If you defend well you keep clean sheets, and that’s what’s happening with Belgium and Chelsea.”