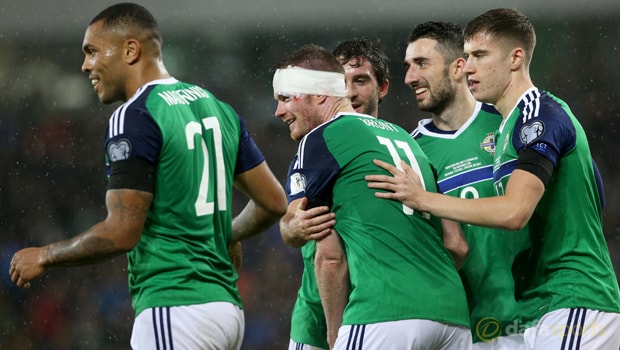 Northern Ireland manager Michael O’Neill was delighted with Chris Brunt’s display in the resounding 4-0 win over Azerbaijan on Friday night.

O’Neill’s men climbed above their opponents in Group C as they look to qualify for the 2018 World Cup.

Northern Ireland reached the knockout stages of Euro 2016 in the summer but had to do it without Brunt, who suffered a serious knee injury in February.

He returned to the international fold for the first time in 13 months and helped his side ease to victory, with talisman Kyle Lafferty opening the scoring against Azerbaijan.

Defenders Gareth McAuley and Conor McLaughlin also scored with headers before Brunt’s shot deflected in for the fourth goal.

Speaking after the full-time whistle, O’Neill admitted Brunt’s quality helped his side kick on as they executed their game plan to perfection.

He told Sky Sports: “He was brilliant. We don’t have a like-for-like replacement so when we lost him in the summer [at Euro 2016] we had to change our system. We saw his class tonight.

“We played Josh [Magennis] purposefully on the right because we knew their full-back was small, so we exploited that.

We got a lot of balls in the box and knew they would struggle to defend that. It was a comfortable victory in the end.”

Northern Ireland must wait until March for their next qualifier but will get a stern test from Croatia when they welcome them to Windsor Park for a friendly on Tuesday night.