Chelsea: Blues duo out for a month 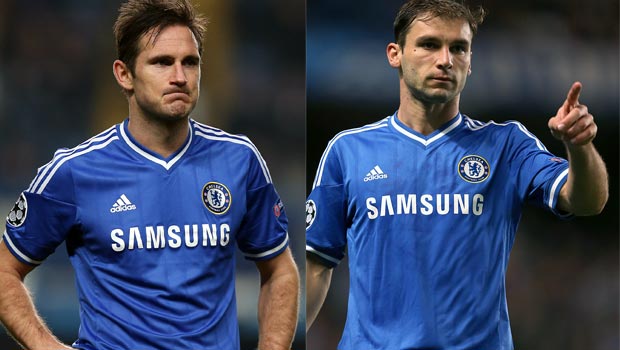 Chelsea manager Jose Mourinho has confirmed Frank Lampard and Branislav Ivanovic are unlikely to play in January after picking up injuries.

The experienced duo both suffered problems in the Blues’ 2-1 win over Liverpool on December 29, Ivanovic having to go off with a knee problem during the first half.

Initial reports suggested the Serbian defender would not be out of action for that long but Mourinho has since revealed the injury is worse than first thought.

The 29-year-old has started 26 matches in all competitions this season but will have to watch the remaining matches in January from the sidelines, along with Lampard.

The 35-year-old England midfielder suffered a muscle injury against Liverpool and had to be withdrawn at half-time. Chelsea are taking no chances on Lampard and will keep him sidelined for an extended period of time.

Having already missed the 3-0 win at Southampton on New Year’s Day, Lampard and Ivanovic are expected to be absent from the FA Cup game with Derby on Sunday, as well as the Premier League games against Hull City and Manchester United.

After Wednesday’s triumph at Southampton, Mourinho praised the strength shown by his squad over the busy festive period, with Chelsea recording three wins and a draw in that time.

“This period is difficult for everyone, and in our case it was very difficult because we played Arsenal, Liverpool and then Southampton away,” Mourinho told Chelsea’s website.

“We always had suspensions and injuries, so the squad was brilliant in the way they answered to our needs.”