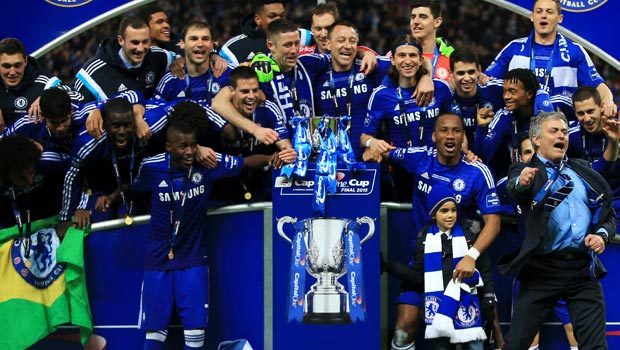 Jose Mourinho watched his Chelsea side lift the Capital One Cup on Sunday and then immediately switched his sights on winning the Premier League title.

The Blues defeated London rivals Tottenham 2-0 at Wembley thanks to John Terry’s strike just before half-time and a second half Kyle Walker own goal after the full-back deflected a Diego Costa strike past goalkeeper Hugo Lloris.

It was Mourinho’s first piece of silverware in his second spell as Chelsea boss and it came 10 years after his first title with the Stamford Bridge outfit in the same tournament when they defeated Liverpool at Cardiff’s Millennium Stadium.

The Portuguese tactician was delighted with the way his side battled to claim the trophy in a hard-fought game against Spurs.

However, Mourinho made it clear that “it’s difficult for me to live without titles” as he is looking for his players to go on to claim the Premier League title and possibly the Champions League.

He said: “I need to feed myself with titles. This is important for me and the boys. For the club it’s one more cup, but it’s the first one of a new team.

“You have Petr Cech, John Terry, Didier Drogba and, after that, everybody belongs to a new generation of players. So, as a team, very, very important.”

Chelsea travel to West Ham on Wednesday with their five-point lead at the top of the table intact following Manchester City’s 2-1 defeat at Liverpool earlier on Sunday – a game Mourinho banned his players from watching.

And the former Porto, Inter Milan and Real Madrid coach is refusing to rule any of the teams in the top-five from the title race at this stage of the campaign.

He added: “It’s in the hands of everyone.

“United are third, right? Nine points (behind)? They are in the title race too. Liverpool (beating Manchester City), I predicted that.”

Chelsea are priced 1.11 to win the Premier League and quoted 8.00 to lift the Champions League trophy this season.