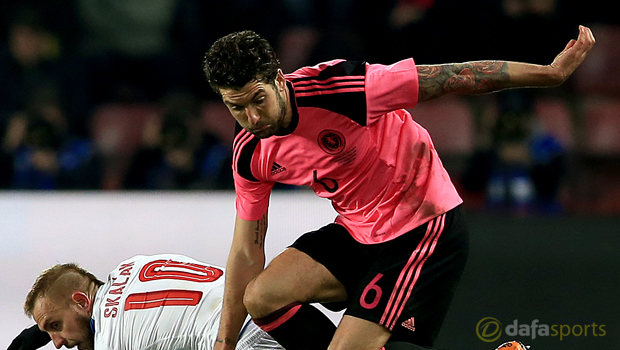 Charlie Mulgrew hopes to have a new contract signed with Celtic in the very near future.

The 30-year-old Scotland international says he has already talked with new Parkhead boss Brendan Rodgers and that the former Liverpool manager had told him he wants to retain his services.

Mulgrew’s contract with the Scottish champions is up this summer and the utility man has confirmed that a new offer has yet to be put on the table.

He says that his talks with Rodgers have put his mind at ease however and that his future remains in Glasgow’s East End.

“I want to stay, but the longer it goes on, you start to wonder if it’s going to happen,” said Mulgrew.

“I’ve spoken to the manager and he wants me to stay, which is important for me. You want to feel wanted. There’s no offer on the table yet, but I think it’s moving towards that this week.”

Mulgrew has left Celtic once before, moving south to join Wolves in 2006 after being told he could leave by then manager Gordon Strachan.

He returned to Scottish football with Aberdeen and, having impressed at Pittodrie, Neil Lennon offered him the chance to return to Celtic in 2010.

He feels there are exciting times afoot under Rodgers’ watch and is determined to be around to see what unfolds.

“The new manager’s plans for the club are great,” he added. “It’s exciting times ahead for Celtic.

I hope I can be involved in that because I think there’s a few big years coming up.”

Celtic are 1.30 to win a sixth straight Scottish Premiership title next season.