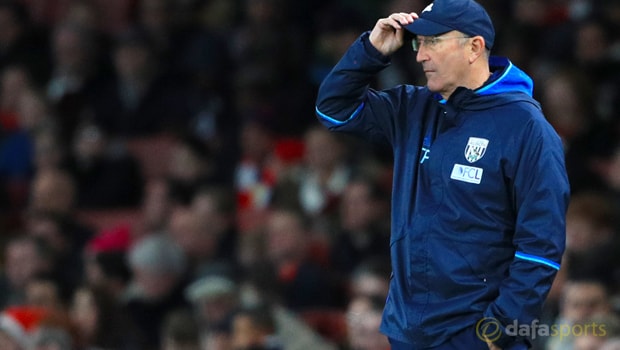 West Bromwich Albion have parted ways with manager Tony Pulis following a poor run of form that has seen them slip down the Premier League table.

The Baggies are just a point and place above the relegation zone following Saturday’s 4-0 home defeat against Chelsea, while they have only won two of their last 21 top-flight games.

A section of the Baggies support have also been critical of Pulis’ style of football and the club have now acted by bringing his nearly three-year tenure to an end, although chairman John Williams admitted the decision was made with a heavy heart.

Williams said: “These decisions are never taken lightly but always in the interests of the club. We are in a results business and over the back end of last season and this season to date, ours have been very disappointing.

“We would like to place on record our appreciation of Tony’s contribution and hard work during a period of transition for the club which included a change of ownership. We wish him well in his future endeavours.”

Pulis, who has also managed Stoke and Crystal Palace in the Premier League, guided Albion to 13th, 14th and 10th place finishes during his three seasons in charge, but it remains to be seen who will replace him at The Hawthorns.

Northern Ireland manager Michael O’Neill and ex-England boss Sam Allardyce appear to be the early front runners to take over the reins, with Pulis’ assistant coach Gary Megson set to fill the void until a new permanent manager is appointed.

Albion are next in action when they travel to Wembley Stadium to take on Tottenham on Saturday and they are priced at 12.00 to win that match, while Spurs are available at 1.29 and the draw is on offer at 5.50.