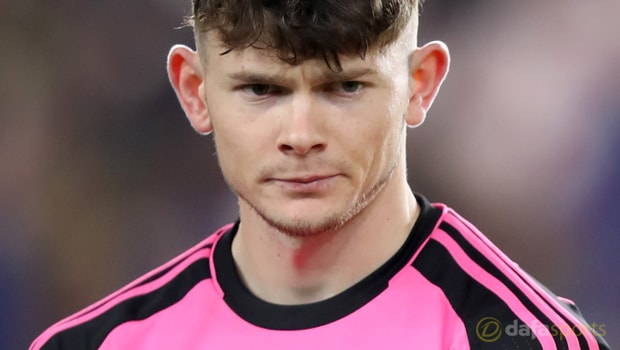 Oliver Burke says he is excited at the prospect of returning to action for West Brom after enduring an injury-plagued start to life at the Hawthorns.

The 20-year-old joined West Brom, who are priced at 4.33 to finish as the top midlands club, from RB Leipzig for a reported fee of £15million on a five-year contract.

Burke made his Premier League debut in the 1-1 draw against Stoke in August after coming off the bench in the closing stages.

However, he has found his gametime restricted by a hamstring injury, which he picked up in a Premier League 2 game, and he is yet to really get his West Brom career up and running.

The forward returned to action for Scotland’s under-21 side in September and he hit the back of the net against Netherlands and Latvia, but Baggies boss Tony Pulis hasso far refused to take a chance on his fitness.

The Scot admits the situation has been tough to deal with mentally but insists he is now raring to go as West Brom prepare to face Manchester City on Saturday.

Burke said: “It’s been very frustrating but I’m near the end of it. ‘It’s obviously frustrating when you come to a new club and you’re injured but that’s life, it happens.

“You have to pick yourself up, keep your head up and be ready for when you’re back.

“We’ve got a very together team at Albion. We work as a unit and work hard.

“I’m very happy to be here and I can’t wait to get to get out there and help the team.

“I’m a very attacking player. I like to get forward and take my man on. That’s the kind of player I am.

“I want to get fans off their seats. I just can’t wait to play.”