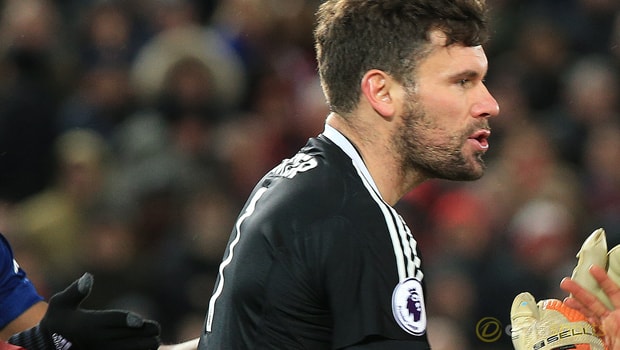 West Bromwich Albion goalkeeper Ben Foster says his side can take some momentum into Sunday’s clash against Manchester United after holding Liverpool to a goalless draw on Wednesday night.

The Baggies made the trip to Anfield on the back of a disappointing 1-0 defeat to Swansea City and many were predicting the Reds, who started with the ‘Fab Four’ of Sadio Mane, Roberto Firmino, Mohamed Salah and Philippe Coutinho, to record a convincing win.

However, Alan Pardew’s men held firm throughout the contest and managed to come away from Merseyside with a draw, lifting the club out of the relegation zone by means of better goal difference.

Dominic Solanke did find the back of the net late on for the hosts but the goal was ruled out for handball whilst Mane and Firmino both spurned good chances to break the deadlock.

West Brom, who have not won in the Premier League since August, welcome the Red Devils, who defeated Bournemouth 1-0 on Wednesday at Old Trafford, to the Hawthorns on Sunday.

Foster says the confidence is growing throughout the squad and insists they will give everything for a positive result against Jose Mourinho’s title-chasing side.

“When we saw the team sheet and they [Liverpool] had the big ones up front, to come away with a clean sheet is no mean feat,” he said.

“We can take the confidence from the night and there is a little bit of momentum to take into the Manchester United game.”

The Baggies are 6.50 outsiders to pick up all three points, a draw is priced at 4.00 whilst the visitors are firm 1.57 favourites.