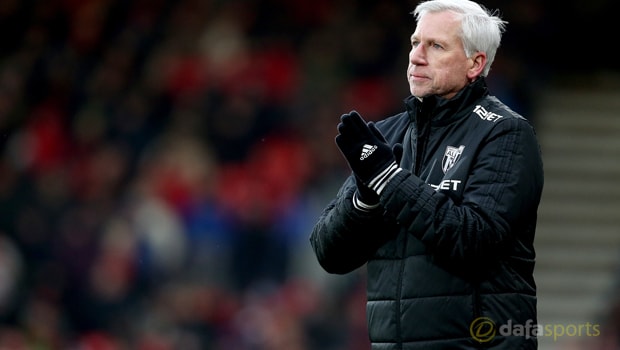 West Brom boss Alan Pardew admits it is ‘getting more and more difficult’ for his side to survive in the Premier League.

The Baggies suffered a 2-1 defeat at the hands of Bournemouth on Saturday, a result that leaves them rooted to the bottom of the standings and 10 points adrift of safety with just seven matches of their league campaign remaining.

Albion have also lost seven matches on the spin in the top-flight, while their only league victory since August came against Brighton in January.

Indeed, West Brom’s eight-season stay in the Premier League now appears to be hanging by a thread with Pardew admitting they face an uphill battle to avoid relegation.

When asked whether the club can avoid the drop, Pardew replied: “I don’t know – it’s getting more and more difficult.”

Albion had looked on course to end their winless run during Saturday’s clash with Bournemouth, as they led 1-0 with 13 minutes remaining, but two late goals sealed the points for the Cherries, a result that Pardew felt was very harsh on his side.

He added: “It’s just galling for the fans and the players today as it was a real committed effort to try and get something. It was really hard on our players – they put in an unbelievable effort.

“It’s tough for us as it’s been one of those seasons where nothing has gone right – the players have worked really hard and it’s difficult to look them in the eye when they’ve got no reward for it.”

Albion are next in action when they play host to Burnley after the international break, but survival looks a forlorn task and they are priced at 1.005 to be relegated come the end of the campaign.