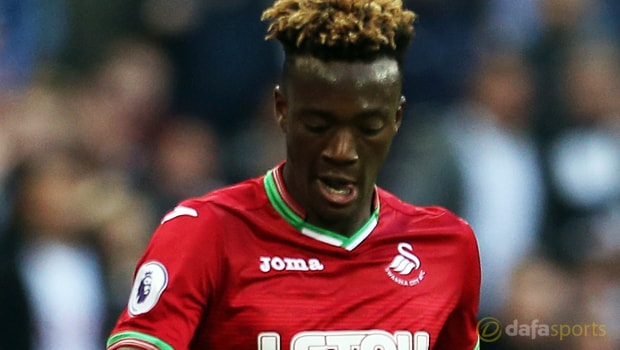 Swansea City loanee Tammy Abraham has confirmed he has rejected the chance to pledge his allegiance to Nigeria because he wants to pursue his first England cap.

The Chelsea frontman was born in London and has already played for the England Under-21s, but he has a Nigerian father. The 19-year-old has scored 10 goals for England’s youth teams so far, but he has yet to impress first-team boss Gareth Southgate.

Recent reports claimed the Nigerian Football Federation was hoping to tempt Abraham to play for the Super Eagles but the youngster has quashed any rumours.

He said: “I have informed The FA that I remain available for selection for England.

“Contrary to reports in the media I would like to clarify that I have not agreed to switch my national team allegiance.

I can confirm I met the President of the NFF after our last game against Tottenham at Wembley on Saturday given he is a friend of my father.

“However, any suggestion that I have made a decision to change my international representation is incorrect and wide of the mark.”

His decision has also been backed by boss Paul Clement, with the former Derby coach claiming he will not try to influence him.

He added: “Hopefully he stays with the English national team. From my point of view, there will be no influence from me.

“If he wants to ask for advice, of course I’ll be there to do it, but I’m sure, between him and his family, he’ll make the right decision.”

Abraham will now be hoping to focus on his club football for the Swans, who take on Watford on Saturday afternoon.

A win could see Swansea climb into the top 10 and Abraham is priced at 5.00 to score first, or 2.25 to score anytime.