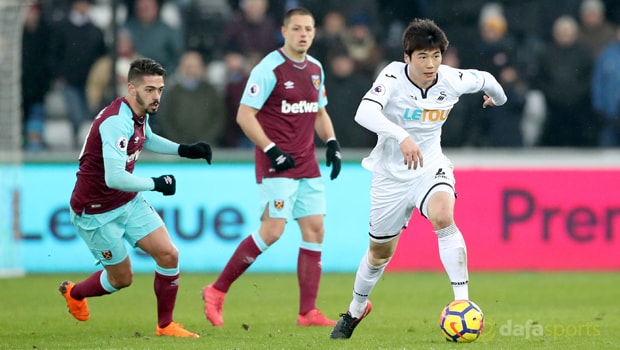 Swansea midfielder Ki Sung-Yueng has hailed their recent home form but insists they must maintain their strong record to avoid the drop.

The Welsh outfit made it seven straight victories on home soil over the weekend as they smashed relegation rivals West Ham 4-1.

Ki, Mike van der Hoorn, Andy King and Jordan Ayew all netted for the Swans to help them climb up to 13th in the Premier League and three points clear of the drop zone.

Carlos Carvalhal’s appointment in late December has coincided with their upturn in form but the South Korean has stressed the importance of maintaining those levels.

Ki told reporters: “Since the new manager came in, we’ve started to play much better at home.

“We struggled at the start of the season and the fans were disappointed. I felt responsible for that.

“But now we are showing more desire in our performance. Hopefully, we can maintain this winning mentality at home.

“We had to react well after losing against Brighton last week and we did that.

“Every single game is a cup final for us and we were brilliant.”

Ki is set to be out of contract with Swansea at the end of the season and the 29-year-old insists he will fight to keep the club in the Premier League.

He added: “I have good memories but I can’t say 100 per cent I’ll stay in Swansea but we will talk to the club.

“Now I have to work for the team and make this team stay in the league.”

Swansea can be backed at 3.00 to win their next outing when they travel to Huddersfield, who are priced at 2.50 to come out on top, while the draw is available at 3.20.