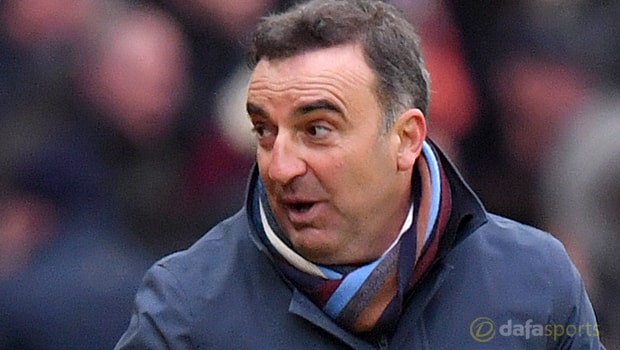 Swansea City boss Carlos Carvalhal wants to ensure the Welsh club are safe in the Premier League before entertaining talk of extending his contract.

Carvalhal’s current deal will run out at the end of this season but there has been plenty speculation that the club are willing to discuss an extension to his Liberty Stadium stay given the job he has done in a short space of time.

The 49-year-old arrived in December with Swansea bottom of the Premier League, five points adrift of safety, and having parted company with Paul Clement.

The Swans are now three points clear of the drop zone with seven games remaining and survival is well in sight.

For Carvalhal, that remains the top priority, ahead of any attempts to secure his own future. “I will always answer the same,” he said.

“I want the focus to stay with Swansea in the Premier League and after we have time to talk about that.

“I talk with the chairman every week. We talk often about everything. The past, the present, the future. These are normal conversations about the team, about how they are progressing. This is normal.

“We can’t talk about the future when we are trying to save the team. This is the most important thing. There are a lot of things on the table, if you stay in the Premier League or you don’t stay.”

Swansea could take another big step to safety on Saturday as they face bottom club West Brom at the Hawthorns.

The visitors are 3.20 to win that contest, with Albion 2.40 and the draw 3.20. Once Swansea are not looking over their shoulders any longer, Carvalhal says he’ll be happy to talk about staying on longer-term.

“When we achieve that, then we will talk. My personal situation is not important. I am happy here. I like the players, the chairman and the owner also. I have a good relationship with all of them and the fans. I think they like me, so this is not a problem,” he added.