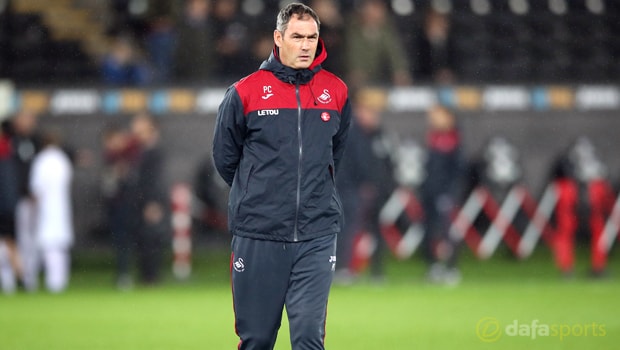 Swansea City manager Paul Clement admits there is a slight imbalance in his squad at the moment and he may look to address the situation in the January transfer window.

The Swans were one of the lowest spenders in the summer, shelling out just under £40million, but they did manage to add six new faces in the shape of Sam Clucas, Wilfried Bony, Roque Mesa, Renato Sanches, Erwin Mulder and Tammy Abraham.

However, the Welsh outfit have struggled in the Premier League so far, languishing down in 15th position and only out of the relegation places thanks to goal difference.

Saturday’s 2-1 defeat to Leicester City at the Liberty Stadium was the third loss from the last four outings for Clement’s men and the pressure is starting to build.

Clement, 45, admits there are areas of his squad that need improving and has hinted he could delve into the January market in order to solve the issues.

“The balance is slightly off because we’re a little bit heavier in midfield than we would like,” Clement said.

“We’re a little bit short at the back, particularly the left-back spot.

“I’ve got the squad I have until 1 January so no complaints or whingeing or moaning about it.

I’ve just go to get on with it and maybe then we can address some of the balance issues when it comes to January. Maybe.”

Swansea return to league action on Saturday with an away trip to Arsenal and the hosts are firm 1.22 favourites to triumph.

The draw is priced at 6.50 while the visitors are massive 13.00 outsiders.