More to come from Connor Roberts 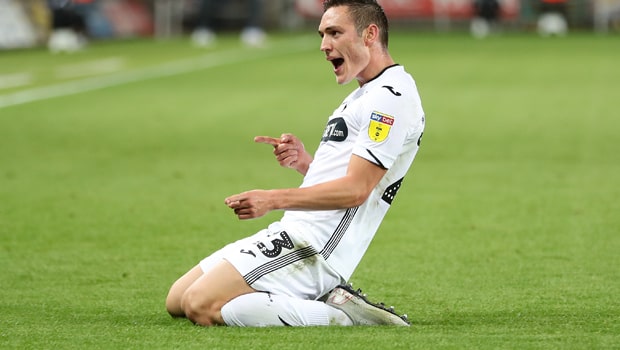 Swansea City right-back Connor Roberts says he is just getting started after signing a new contract with the club.

The Wales international has burst onto the scene this season under coach Graham Potter, featuring in all 17 Championship matches the Swans have played in thus far.

The 23-year-old, who has scored twice this term, was due to fall out of contract at the end of the campaign and was attracting interest from several clubs.

However, the academy product has committed his future to the Liberty Stadium outfit, signing on until the summer of 2022.

Roberts’ good domestic form has helped him to become a Wales regular under coach Ryan Giggs and he is confident he can continue to improve as he tries to help Swansea earn promotion and his nation reach Euro 2020.

“I’m over the moon to get it done”, he told the club’s website.

“Even though I’ve signed this contract there is more to come from me.

“People can say I have made it, but when I speak to my family and partner I say it’s just the beginning hopefully. I’ve had a good few months, but I want to keep playing well, improving and proving I’m good enough and worthy of a place in the team.”

The right-back is the fourth member of Potter’s squad to have committed to the club in recent weeks, with Jay Fulton, Joe Rodon and Matt Grimes also agreeing new deals.

The quartet are expected to feature in the tough game against Championship leaders Norwich City on Saturday.