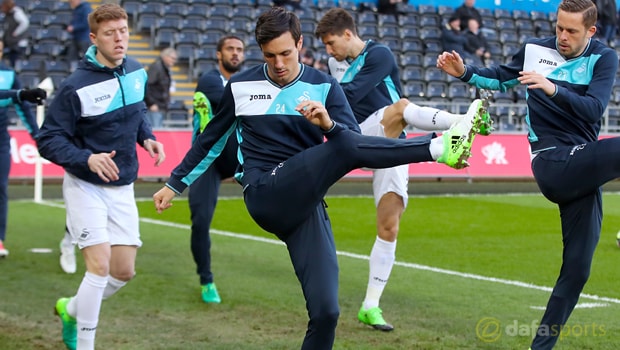 Midfielder Jack Cork believes the togetherness in the Swansea squad played a key role in helping them win their fight to remain in the Premier League.

The South Wales outfit have endured an extremely tough campaign after going through three different managers.

Francesco Guidolin started 2016-17 at the helm, but after a sluggish start he was replaced by Bob Bradley on October 3.

However, the American failed to improve their fortunes and was sacked after just 85 days in charge with Paul Clement eventually drafted in to salvage the campaign.

Clement immediately turned results around and, although they did start to drop off at the business end of the season, a run of four games unbeaten has seen them retain their top-flight status.

With a succession of managers through the door Cork, believes the togetherness and bond between the players at the Liberty Stadium has been key to getting over the line.

Cork said: “It’s been a huge effort from everyone, especially over these last few games.

The game at Sunderland on Saturday was amazing to see with everyone coming together like that; the players and the fans. We’ve done it as a unit – we’ve done it together.

“You could see the great team spirit within the squad at Sunderland. Everyone wants to do it for each other.

For Angel (Rangel), Wayne (Routledge) and Jefferson (Montero) to charter their own plane to come and support the lads at the Stadium of Light says it all.”

Swansea’s safety was officially confirmed last weekend and they can be backed at 2.05 to win their final game of the season, while West Brom are priced at 3.75 to take three points away from the Liberty Stadium and the draw is available 3.60.