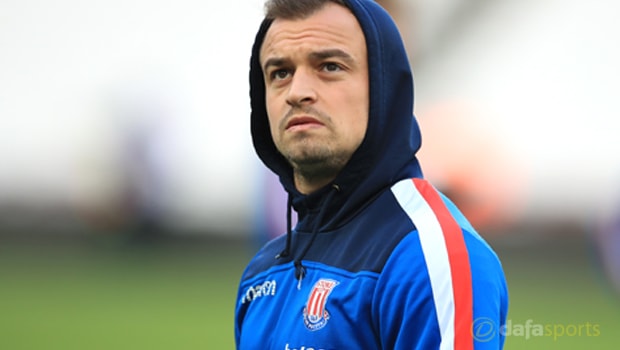 Stoke forward Xherdan Shaqiri believes they can beat the drop by winning three of their four remaining Premier League fixtures.

The Potters, who are priced at 1.08 to be relegated, were held to a 1-1 draw by West Ham on Monday and are five points adrift of safety.

Peter Crouch came off the bench to give Stoke hope of claiming victory late on at the London Stadium before West Ham substitute Andy Carroll bagged the equaliser with minutes remaining.

Stoke’s last Premier League win came in January when they defeated Huddersfield 2-0, having failed to win any of the 10 following outings.

Many pundits believe Stoke, who are still to play Burnley, Liverpool, Crystal Palace and Swansea, will drop out of the top flight, but Shaqiri is refusing to give up.

Burnley and Palace will travel to the Potteries, with their other two engagements coming on the road, and Shaqiri believes three wins could see them edge out of trouble.

Shaqiri said: “Of course, we have four games to go and the belief is there. We have to win some games, it is that simple.

“I hope that in the last four games we stay together and we win a minimum of three games.”