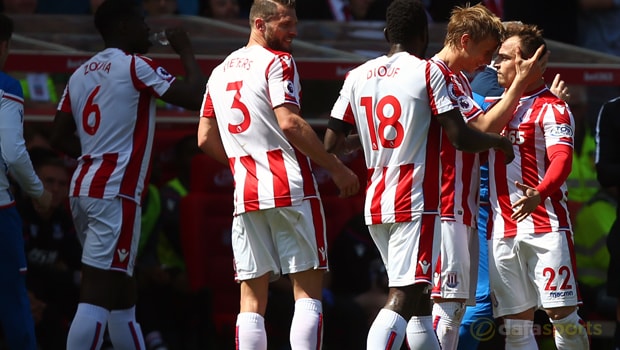 Switzerland international Xherdan Shaqiri has revealed he will be leaving Stoke City this summer and says he would like to keep playing in the Premier League.

Shaqiri arrived at the Stoke Stadium in 2015 from Inter Milan and he has been a regular first-team fixture ever since, making 84 Premier League appearances and scoring 15 goals.

The 26-year-old was unable to save the Potters from relegation to the Championship this past season and his time in Staffordshire looks like it will be coming to an end this summer.

A number of Stoke’s key players are being tipped to leave in this transfer window, with the likes of Welshman Joe Allen, centre-back Ryan Shawcross and England goalkeeper Jack Butland attracting big interest.

Shaqiri, who has also played for Basel and Bayern Munich earlier in his career, has now added his name to the list and revealed he would like to stay in England’s top flight is possible.

He told Aargauer Zeitung: “It is no secret that I will leave the club.

I think the [Premier] league is perfect for me. I would love to stay in England but I don’t want to rule anything out. It’s the best league with the best players.”

Shaqiri’s immediate attention is on the 2018 World Cup in Russia and he will be hoping to help Switzerland qualify from Group E, which includes 5.00 favourites Brazil, Costa Rice and Serbia.

The Swiss, who have failed to make it past the last-16 stage since hosting the major tournament back in 1954, are 7.00 to top the pool whilst they are 2.05 to qualify for the first knockout stage.