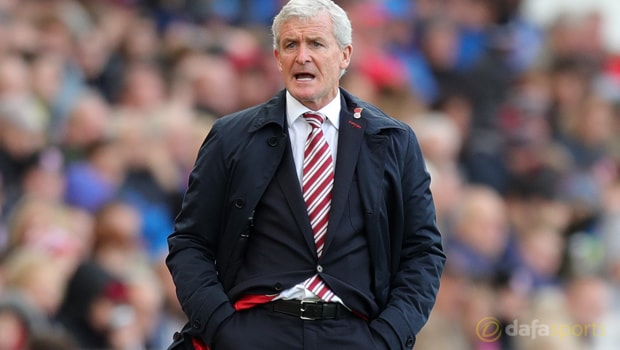 Stoke manager Mark Hughes insists his side won’t underestimate Brighton on Monday and has urged his squad to keep building momentum.

The Potters made a sluggish start to the season and Hughes was reportedly under pressure from the board after failing to achieve positive results.

Stoke, who are priced at 7.50 to be relegated, have recently turned a corner and they head into Monday’s engagement with Brighton at the Amex Stadium unbeaten in two.

Hughes saw his men claim an impressive victory away to Watford at the end of October before playing out a 2-2 draw with Leicester prior to the international break.

The Staffordshire outfit head to the south coast sitting 15th in the Premier League but they could finish the weekend as high as tenth if they claim all three points.

The Welshman has stressed the importance of building momentum, although he expects newly promoted Brighton to put up a stern test.

Hughes told Stoke’s official website: “We haven’t maybe hit that run of form that has propelled us up the table yet, but we are in good shape going into the game on Monday.

“We have had good performances in each of our last two fixtures so we want to build upon that and keep the momentum building against Brighton.

“We are under no illusions as to how difficult and challenging it will be for us though, because Brighton have been in impressive form recently.

“They have a set way of playing, they have players within the group that can hurt any side in the league, so we are going to have to be right at it if we are to get the result we are after.”