Peter Crouch still has ‘huge role’ to play at Stoke 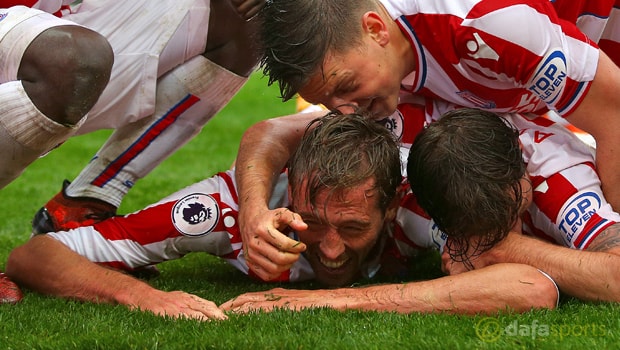 Veteran striker Peter Crouch still has a big role to play for Stoke City according to boss Mark Hughes.

Crouch, 36, came off the bench to net the winner in a 2-1 win over Southampton on Saturday and Hughes indicated afterwards the former England frontman still has plenty to offer.

Mame Biram Diouf’s header put the hosts ahead before half-time but they were pegged back with just 15 minutes left when Maya Yoshida netted for Saints.

Crouch, sprung from the bench with 20 minutes to play, poked home from close range after Joe Allen’s persistency in the box paid off with five minutes remaining.

Hughes admits that Crouch would love to be starting regularly but his manager is content with the impact sub role for now.

Four of Peter Crouch’s last five Premier League goals have come as a substitute, and he is the oldest player to score in the top flight so far this season.

“Crouch wants to play more games and wants more starts but as a sub he gives the opposition something more to deal with,” Hughes said.

“He has a huge role here and has come up trumps for us late in the day. We got over the line in the end.”

It wasn’t such a memorable day for Saido Berahino, the player Crouch replaced, whose wait for a Stoke City goal goes on after he saw a penalty saved by Fraser Forster not long after Diouf had opened the scoring.

Hughes admits the 24-year-old is going through the mill right now, but he believes the former West Brom frontman will come out the other side.

“It is a shame for Saido Berahino,” Hughes said.

“I thought he did OK. He showed personality to grab the ball and unfortunately the keeper batted the penalty away.

“He will always be judged on goals. He is working hard, he is in good physical condition but his time will come.”