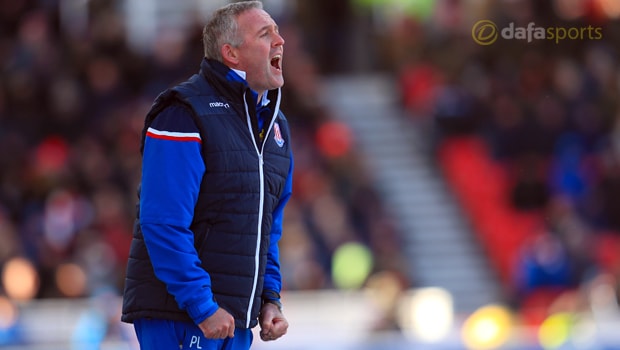 Stoke boss Paul Lambert felt his side deserved at least a point from Saturday’s 2-1 home defeat to Everton.

The Potters were forced to play the final hour of the contest with 10 men after Charlie Adam was shown a straight red card for a challenge on Wayne Rooney and they also bounced back from falling behind during the second half when Eric Choupo-Moting cancelled out Cenk Tosun’s strike.

However, Tosun grabbed his and Everton’s second late on to seal the victory and the result leaves Stoke deep in the relegation mire, as they are currently second-bottom of the standings and three points adrift of safety.

Lambert was certainly disappointed to lose Saturday’s match, particularly as he felt his side’s performance merited at least a point from the contest.

Lambert was also unhappy that Everton’s opening goal was allowed to stand, as Tosun appeared to be in an offside position, but the assistant referee failed to raise his flag.

“The thing I get disappointed about is that it’s on the linesman’s side.

“He’s looking across the line, he’s got to see it. You’ve got to get the big moments right, it’s a mistake.”

Stoke are priced at 1.36 to be relegated come the end of the campaign and they face a daunting run of fixtures after the international break, with back-to-back games to come against Arsenal and Tottenham.