Paul Lambert happy to be ‘in the fight’ 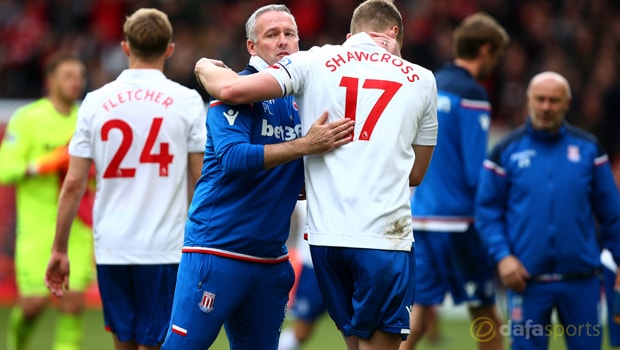 Paul Lambert insists Stoke City remain ‘in the fight’ for Premier League safety after their battling draw with Liverpool at Anfield.

Stoke held the Reds to a scoreless draw on Saturday, though they remain second from bottom and three points behind Swansea in 17th spot with only two games remaining.

The three teams directly above them – Southampton, Swansea and Huddersfield – all have a game in hand on Lambert’s men but the Scot is content that they still have a chance to survive.

“All I wanted was to go into the last few games with a chance of staying up,” Lambert told BBC Sport.

“Hopefully results will go our way. This is not for the faint-hearted. We are in a fight. I will take the fight for anything, and so will the lads.”

Liverpool could have been ahead early on when Mohamed Salah fired wide when through on goal, while the Reds also felt they should have had a late penalty for a hand ball against Erik Pieters.

Lambert, who replaced Mark Hughes in January, felt a draw was a fair outcome and he says Stoke wouldn’t be in trouble had they applied themselves similarly all season.

“We deserved it – we came with a good game plan and played a really good game; the commitment, throwing bodies into challenges, and we might have sneaked it,” said Lambert.

“If we had played like that from the start of the season, I would not be here and they would be cruising in the league.”

Stoke face Crystal Palace and Swansea in their final two matches and are 2.50 to beat the Eagles next weekend, Palace are 2.80 and a draw is 3.40.