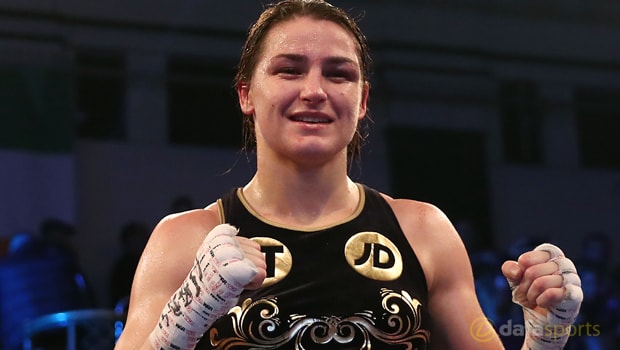 Katie Taylor was delighted with her work after winning a points decision to defeat Victoria Noelia Bustos as she unified the WBA and IBF lightweight world titles in Brooklyn.

The Irish boxer was having just her ninth professional bout but she gave a tactical masterclass in getting the best of her Argentine opponent.

Taylor took a unanimous decision win via scores of 99-91 twice and 98-92 to add Bustos’ IBF belt to her collection.

The former Olympic gold medalist was much the sharper in the early rounds and amassed a healthy advantage.

Taylor also stood firm in the eye of a storm late in the contest when Bustos was forced to go for broke and chase a knockout.

“I’m so happy right now, it’s always been my dream to unify. It was a tough contest, I had to work for every second and I had to be sharp,” a delighted Taylor said afterwards.

A series of uppercuts from Bustos in the final round hit their target but Taylor wasn’t backing down, the pair locked in a battle in the centre of the ring that brought the Brooklyn crowd to their feet in appreciation.

Taylor is keen to add more belts to the growing collections and won’t shirk any contest.

“I had to be clever from the start, she was a good counter puncher and came on strong at the end, I think I mixed it up well,” she added.

“She just kept coming, I was prepared for a tough 10 rounds, I have to thank my whole team for the preparations, we had a great camp.

“There’s probably a bit too much fight in me but it’s great to entertain the fans. I’m there to fight anyone, I’m lucky to have some great champions in my division and I want all the belts.”