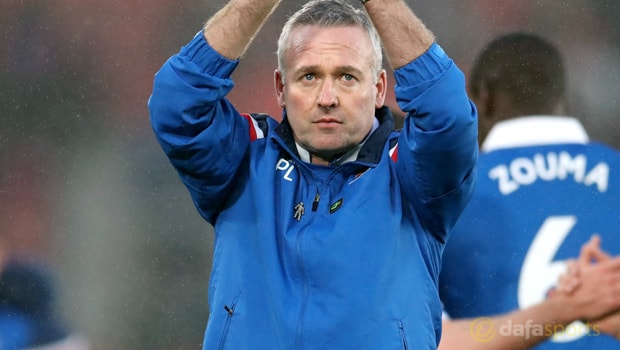 Paul Lambert has talked up Stoke’s recent form and believes they have enough quality to pull themselves clear of the relegation zone.

Stoke have improved since Lambert was drafted in to replace Mark Hughes on January 15 but they still remain in the bottom three as they gear up to host Premier League leaders Manchester City on Monday.

The Potters have lost just one of their six games with Lambert in charge, but they have drawn four of those outings and remain a point adrift of safety.

Lambert has undoubtedly made Stoke a tougher team to break down but a lack of threat in attack has prevented them from turning draws into much needed victories.

Their remaining nine games are likely to test Stoke’s character with the likes of City, Arsenal, Tottenham and Liverpool all still on their agenda.

Trips to relegation rivals West Ham and Swansea as well as a home clash with Crystal Palace could all prove crucial if they are to retain their top-flight status.

The 48-year-old has hailed the spirit within his squad and feels they can do enough to get over the line if they stick together and continue to fight.

Lambert said: “The spirit among the players at the moment is very good and I think it shows, the way we try to play,” Lambert said.

“Since I’ve been at the club it’s been excellent. I think there’s a really good spirit there that they want to climb the table, and overall we’ve only been beaten once in six.

“We’ve had a lot of draws in there but at least the form at the moment is pretty decent. It’s incredible the way the table is and I think that’s the beauty about it.

“We’ve picked up points everywhere other than in the Bournemouth game [a 2-1 away defeat] and we just need that little bit of luck at certain times.

“But if keep this spirit and this fighting attribute we’ve got, then we’ll be fine.”

Stoke are priced at 13.00 to claim a surprise win against City, who can be backed at 1.22 to take all three points away from the Stoke Stadium, while the draw is available at 6.50.