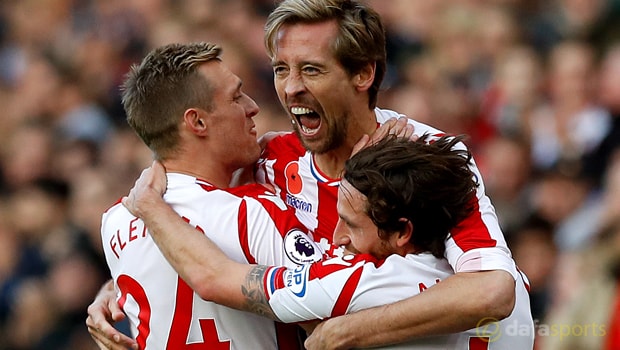 Stoke striker Peter Crouch still has all the attributes to pose a serious threat in the Premier League and could force his way into the starting eleven, according to Mark Hughes.

The 36-year-old frontman helped Stoke to claim a share of the points in Saturday’s Premier League meeting with Leicester.

Leicester led 2-1 when Crouch was introduced from the bench after 69 minutes and the former Liverpool striker needed just four minutes to register his third league goal of the campaign.

Crouch steered a powerful header beyond Kasper Schmeichel and continued to be a nuisance during the closing stages.

Hughes has turned to Crouch on a number of occasions this season and the veteran has not let them down, having bagged the winner against Southampton, while he also salvaged a point against West Brom in August.

The Potters boss has talked up Crouch’s credentials and admits that he may have to start deploying him from the start if he continues to impress.

Hughes said: “He’s not a bad option, is he? “The big man has come on again and done what he always does, which is make an impact.

“Peter’s quality and attributes are there for all to see.

He came on and was a real threat and he gave them something else to think about and we changed things about and were a threat from that point onwards.

“He can still score at this level because physically he’s in the right place and is engaged in the game.

I thought he was exceptional in his general play as well, not just the great goal he scored.

“Everybody says he’s Plan B, but if he continues he will be Plan A. I must say, he’s doing nothing wrong.”