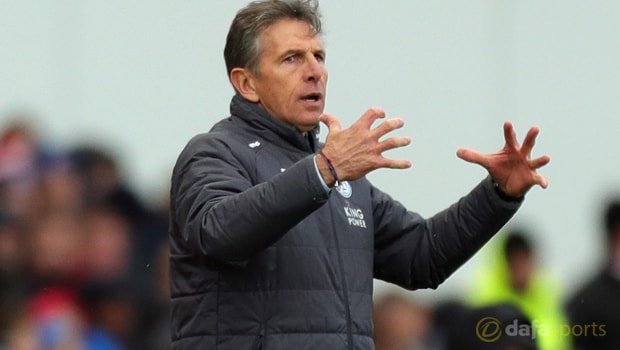 Leicester manager Claude Puel has challenged his squad to take more control of games and hopes they continue building momentum after the international break.

The Frenchman saw the Foxes held to a 2-2 draw in his second game in charge on Saturday at Stoke but he was left feeling frustrated as they twice threw away a lead.

Vicente Iborra and Riyad Mahrez both netted for Leicester but Xherdan Shaqiri and Peter Crouch responded for the home side.

Leicester are now unbeaten in two matches since Puel’s appointment, having beaten Everton last weekend, and the club appears to be heading in a much more positive direction.

The international break could potentially disrupt their upturn in form and they will face a tricky test when they return to action against Manchester City on November 18 at the King Power Stadium.

Puel insists he is happy with what he has seen so far and hopes his squad can continue building momentum when they regroup later this month.

“It was important to play this game with passion and intensity,” Puel said.

“It was an encouraging game with a lot of chances, it will be important to keep this going and to see our next game against Man City with good spirit and dynamics.

“It’s interesting to see the passion and conviction. It was important to keep the control of the game after 25 minutes. The second half was better.

“It’s important to perform and keep this good level and attitude but control the game a little more.”

Leicester can be backed at 7.00 to pick up a surprise win against Manchester City, who are priced at 1.40 to claim all three points, while the draw is available at 5.25.