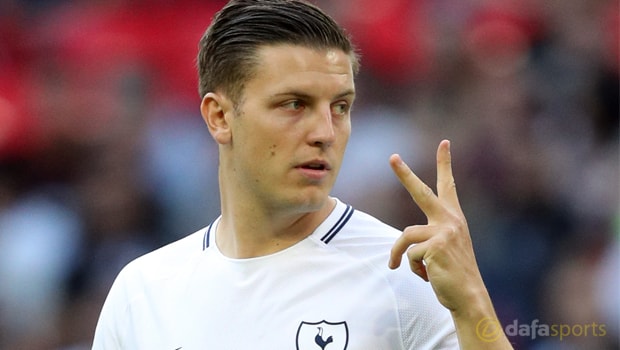 Kevin Wimmer says he excited about the challenge of establishing himself at Stoke after completing his move from Tottenham.

The Austrian moved to Spurs from Cologne in the summer of 2015 but, despite impressing in his cameo roles, he failed to dislodge Mauricio Pochettino’s preferred central defensive pair of Toby Alderweireld and Jan Vertonghen.

Davinson Sanchez’s signing from Ajax appeared to indicate his time was up in north London and Wimmer has now agreed a five-year deal with the Potters,in a deal worth a reported £18m.

Stoke have been busy strengthening at the back this summer, with Kurt Zouma and Bruno Martins Indi also on board in Staffordshire.

Wimmer will only add to Mark Hughes’ options and he acknowledges he faces a tough task to establish himself.

The 24-year-old will have to wait until after the international break for his debut, with his side’s next fixture at home against Manchester United on September 9.

The quality of the Stoke squad means these could be exciting times in the Potteries and Wimmer is relishing his fresh start.

Speaking to Stoke City+, he said: “I had some really good conversations with the manager, Mark Hughes, and they were important for me.

“There are players of real quality here in every position, and for me that is good, it helps generate good competition for places and drives us on to hopefully progress even further.

“We have a good talented group of young players here, some very big names, too, so it is an exciting time to be part of this club, I can’t wait to get going now.”