Jack Butland: We can avoid the drop 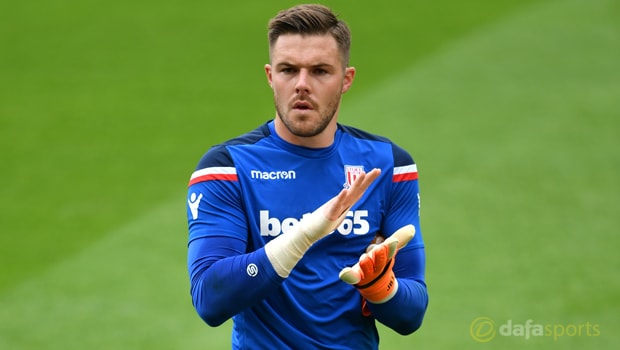 Stoke City goalkeeper Jack Butland is adamant his side can still avoid relegation despite their tough run of fixtures in the coming weeks.

The Potters remain 19th in the Premier League table after 35 games and they are still four points from safety.

Coach Paul Lambert has only been able to win one game since taking charge of the club, which was back in January against Huddersfield Town.

Stoke’s performances have improved since Lamber took charge but a run of four defeats in March and April has put them under immense pressure.

After back-to-back draws against West Ham and Burnley, the Potters now play Liverpool this weekend. They then take on Crystal Palace and Swansea City but Butland is refusing to give up hope.

He told Sky Sports: “Are we confident? Always. You’ve got to be.

“It can be easy to come in and be downhearted or give up but it’s important that we don’t. You have to stay upbeat.

We’re picking up points – not the three we’d like – so the gap is closing but we need three points now.

“We’ve shown we can score goals and get ahead and we’ve shown lately we can be a lot better defensively as well.

The signs are there but this is the stage of the season where talking’s not enough – we need to do it on the pitch.

“Until it’s mathematically impossible, you keep going. I believe other teams have tougher run-ins and the next two games we kick off earlier than everyone else.”