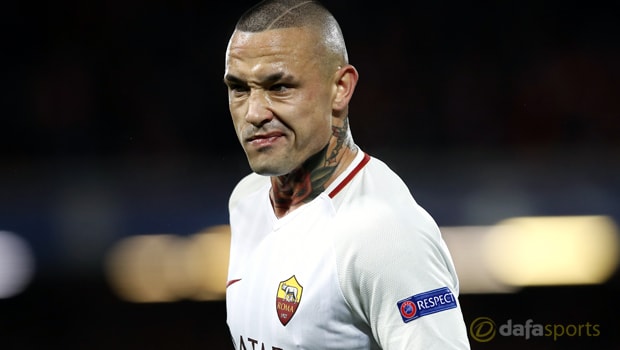 Roma midfielder Radja Nainggolan has warned Liverpool they can produce another heroic performance when they host them in the Champions League next week.

Roma need to come back from 5-2 down in Rome after a disastrous night at Anfield on Tuesday.

However, Edin Dzeko and Diego Perotti scored in the final 10 minutes to give Roma a fighting chance ahead of the second leg.

Roma produced the result of the competition so far when they came from 4-1 down to beat Barcelona 4-4 on aggregate and Nainggolan is confident they can do it again.

He told reporters: ”We started the game well, but then we made too many mistakes and we gave our opponents too many chances.

“At 5-0 it was too much, but with the 5-2 we still have the hope of going through. We need to reassemble like we did with Barcelona and go through with a 3-0 win.

“We know it’ll be difficult, but we’ve already done it once.” Roma will have to end Liverpool’s unbeaten run if they are to be successful next week, with the Reds unbeaten since March 10.

The Italian giants are 2.40 favourites to win, with the draw 3.75, while Jurgen Klopp’s men are 2.60 to win at the Stadio Olimpico.

Liverpool are also 2.50 to win the competition, with Real Madrid 2.00 favourites after winning 2-1 against Bayern Munich on Wednesday.