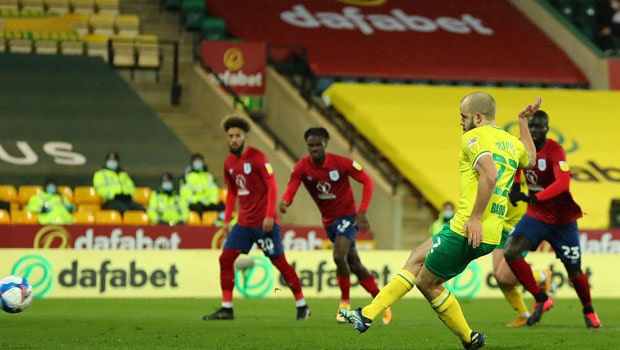 Norwich City continued their impressive form in the Championship after cruising to a convincing 7-0 win.

Championship table-toppers Norwich City moved to within five points of securing themselves a straightforward return to the Premier League after they annihilated Huddersfield Town in a ruthless display.

Teemu Pukki got himself a hat-trick while Emi Buendia, Todd Cantwell, Kieran Dowell, and Jordan Hugill also got their names in the scoresheet. They were extremely clinical and buried the game quickly as five of the Canaries’ seven goals came before half-time.

Huddersfield were dismantled as their five-match unbeaten run came to an embarrassing end. The huge margin of defeat now means that Huddersfield have dropped down to 19th place, and their goal difference took a significant loss. They now also go below Derby County, eight points above the drop zone

Demeaco Duhaney was very close to giving Huddersfield a consolation goal after he missed a header against the post, while Danny Ward was denied on the rebound by Norwich City goalkeeper Tim Krul.

Before this game, Norwich has been frustrated in two consecutive draws against Blackburn and Preston. However, Norwich returned to winning ways in an incredible style to extend their unbeaten run to 12 games and move 17 points clear of third-placed Brentford.

After finishing bottom of the Premier League in the 2019/20 season, the Canaries could secure promotion back to the top flight as early as Saturday should result in other matches go their way.

This 7-0 victory was their biggest league win in almost 70 years.

Pukki also showed that he could act as a provider of goals. He assisted Buendia to score Norwich’s third goal.