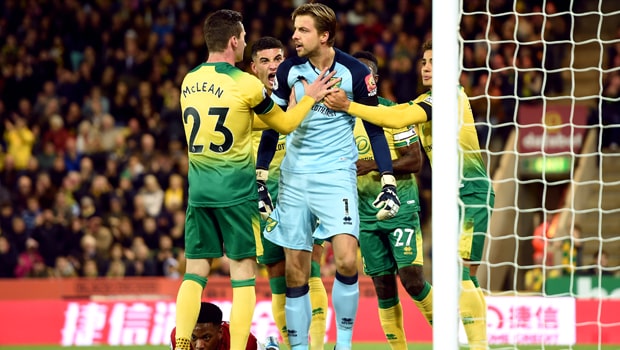 Newly promoted Premier League outfit Norwich City had ran into problems to start their first season up with the big boys. Having only won twice in their first 12 Premier League games and the last victory dating back eight games and seven weeks, Norwich looked like a surefire relegation candidate. While they are still featured in the relegation battle and the bottom three of the league, victory on the road against Everton sparked a tiny light at the end of the tunnel.Norwich has had major issues adjusting their attack first mentality to better suit the high caliber opposition they’re facing in the Premier League after causing some serious havoc in the Championship last season. Their process has not been helped by a handful of injuries to key players, especially in the defense. Even with the issues, Norwich should have been able to put up fiercer fight against their main opponents, but losing to the likes of Watford, Brighton and Aston Villa showed that they are currently ways off the performances needed to survive in the toughest top tier in Europe.

The game against Everton, after the international break, somewhat changed that gloomy view. Norwich was able to perform at an acceptable level for the whole 90 minutes and, more importantly, got some goal scoring support from someone else than Teemu Pukki. The Finn started the season with a blast, scoring six goals early on, but for the past weeks his numbers have gone down as the opposing defenses are obviously marking the striker more carefully.

Overcommitting to guarding Pukki backfired for Everton, who were in control for the most of the game. The first half didn’t feature too many clear cut chances, with both teams playing somewhat carefully and defending well. In the second half it was out of the blue Norwich taking the lead, with Pukki as a creator and Todd Cantwell the finisher on 54th minute. Pukki took the attention of three Everton defenders before slipping the ball into the path of Cantwell, who coolly slotted the ball past Jordan Pickford.

Everton piled on the pressure after going down, but Tim Krul in the net for Norwich made some brilliant efforts and the defense played their heart out to protect the goal. Substitute Dennis Srbeny then silenced the home fans with his first goal of the season on 92nd minute, wrapping up Norwich’s crucial 3rd victory of the season. With the 0-2 win the Canaries took an important step to 18th place and only a point to safety from relegation.

While the battle is far from won, the victory on the road as huge underdog sends a clear message – Norwich will not go down without a fight. Next up for Norwich is Arsenal at home on the 1st of December. Don’t forget to participate in Dafabet’s Norwich City FC Prediction Challenge in order to win weekly free bets!