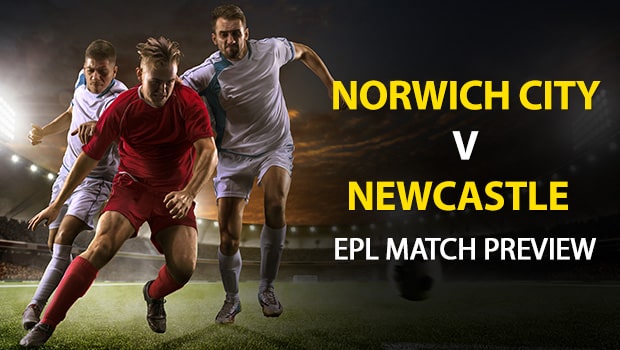 Carrow Road is the venue as Norwich City and Newcastle United match up this Saturday in Premier League action. Both sides enter this weekend following a loss in Week 1.

Draw: There’s a about an 29 percent chance this weekend’s match ends in a draw. That happens in 22 percent of AccuScore sims, suggesting no added value on the pick.

Last 6: Going back into the summer and end of last season, Norwich has 1 loss, 2 wins and 3 draws overall in their last six. They opened this season with a 4-1 road loss vs Liverpool. Newcastle, in that same span, has 3 losses, 2 wins and 1 draw overall. They came up short, 1-0, at home vs Arsenal last weekend.

Head to Head: These two sides last matched up in Premier League action back in 2016 when Norwich City won, 3-2. They last played in any competition (League Championship) in 2017, finishing in a 2-2 draw.

Low Expectations: Heading into this season, there really haven’t been any expectations for Newcastle. New manager Steve Bruce is being asked to right a ship that just doesn’t have enough quality talent to compete on a weekly basis. They finished last season No. 13; all signs point to an even worse finish in 2019-2020. The only glimmer of hope is in Joelinton; the only thing for Newcastle’s fans to be excited for.

Betting on the Total: 3-star hot trend pick here from AccuScore. The OVER hits in about 60 percent of simulations, compared to the 50.5 percent picks offshore books are offering.

Joelinton has a 24 percent chance to net the ball for Newcastle. Joelinton averages 2.02 shots overall per sim, 0.81 shots on goal per and 0.28 goals per sim.

For Norwich City, we’ll have our eyes on Teemu Pukki. He has close to a 59 percent chance to score, averaging 3.36 shots overall per sim, 1.37 shots on goal per and 0.88 goals per sim.

There’s a 44 percent chance Norwich City win this matchup in regulation. That happens in 61 percent of simulations, suggesting some added confidence on the Foxes.