Norwich City held to a goalless draw at home to Millwall 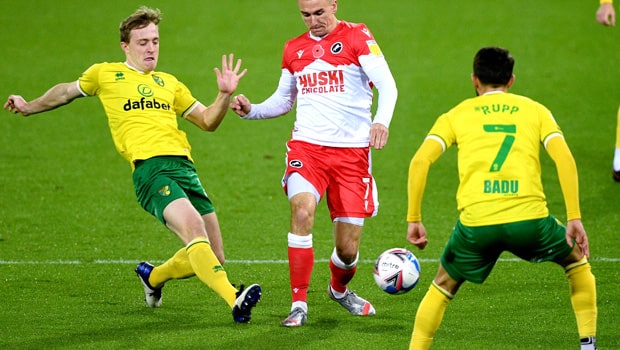 Norwich City played out a gruelling 0-0 stalemate in their Championship match against Millwall on Tuesday night at Carrow Road.

The Canaries were held to a scoreless draw at home to Millwall. Although they were able to extend their unbeaten Championship run to six games, that lacked the cutting edge that they used to score against Bristol City at the weekend.

Todd Cantwell was left out of the Norwich matchday squad and was replaced by the fit Christoph Zimmermann on the bench after he (Cantwell) sustained an ankle injury in training. Cantwell had undergone scans earlier on Tuesday, and City’s medical staff are awaiting the results.

Farke decided to name an unchanged starting line up from the side that defeated Bristol City 3-1 last weekend.

The game began with Norwich City seeking to score early. The hosts started out on the front foot from the get-go. Norwich midfielder Emiliano Buendia threaded a ball through to Teemu Pukki, but Millwall’s Murray Wallace cut out the intended pass.

Norwich’s Przemyslaw Placheta came close to breaking the deadlock with a first-half shot that hit the post. Stiepermann also had a great chance to score in the 18th minute when Pukki sent a clever pass into the path of the German, but he shot a tame strike at Bialkowski.

Millwall also had their chances when Jacob Sorensen’s poor clearing header fell to Millwall forward Shaun Hutchinson, but he wasted over a good chance from 25 yards.

In the second half, Daniel Farke made a triple change, bringing on Kenny McLean, Mario Vrancic, and Jordan Hugill, who replaced Stiepermann, Rupp, and Placheta, respectively, with City now forming a defensive three-man neckline.

In spite of the chances, Norwich City never put the ball in the back of the net and could have even gone behind by a stoppage-time when Shaun Williams sent a long-range effort which hit the bar.

Despite the draw, City still moved up a place to third position with the point after Bournemouth lost to Sheffield Wednesday.