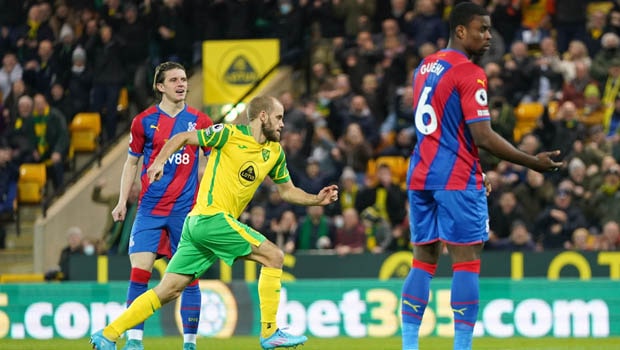 Norwich City’s Teemu Pukki scored fastest Premier League goal of the season (1’) and managed to hold on for a point despite a missed Crystal Palace penalty. Since November 2013, Norwich City remain winless in their last seven Premier League matches against Palace.

With the point, Norwich remain in 18th place with 17 points from 23 matches. Palace are 13th with 25 points from 23 games. Norwich are one point behind Newcastle United who have 18 points in 22 games.

Pukki scored with just 38 seconds on the clock, starting the match on a positive note at Carrow Road. Wilfried Zaha had a chance to put Palace up 2-1 on a penalty just minutes after finding the back of the net (60’), but was denied.

“I think with his potential he can do more,” Palace manager Patrick Vieira said prior to the match. “I am really demanding on him because of his ability, in possession and out of possession. I think he is a player that can deliver and he needs to be more consistent.”

“It was a nice goal from all of us, and that’s important for us as forwards to do those kinds of things together and be close and give assists to each other,” Pukki said. “It gives us all confidence.”

Palace have now won just one of their last 13 away matches in the Premier League (7 losses, 5 draws).

“I believe at times [there was] a lack of more desire, more belief in ourselves to go and get that goal,” Vieira said after the match. “We can say we played some good football, but it’s not enough.”

Palace pushed hard in the final third of the match, but Norwich’s defense stood strong with Gunn leading the way.

Palace dominated the possession battle 70-30, finishing with five shots on target compared to just one for the home side.

“It was a little bit of a rollercoaster,” Norwich boss Dean Smith said. “They solved the problems we gave them and then we had to change. Unfortunately they scored in that period we made changes. We lost shape in the second half because we weren’t good enough when we won the ball back. Did we score too early? We created two other big chances in the first period. Teemu was disappointed he didn’t score another one of them, had he I think the game might have got away from Palace if we scored a second.”

Norwich City will host Manchester City this weekend (Saturday, 12 February), while Palace hit the road the same day against Brentford.