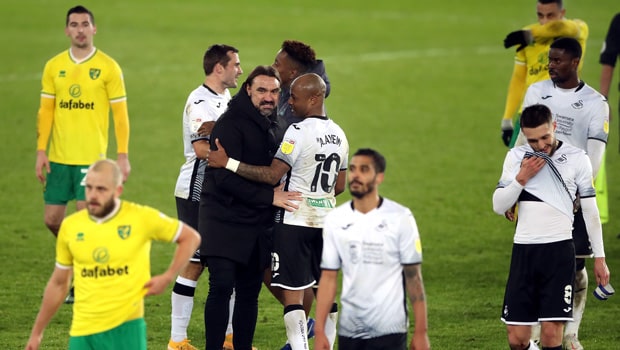 Swansea City earned an important three points Friday in South Wales as they sealed a 2-0 win at home vs Norwich City behind goals from Andre Ayew and Conor Hourihane. Norwich City’s Ben Gibson referred to the side’s loss as a ‘catalogue of error.’

“Obviously it’s really disappointing,” Gibson said Friday. “We’ve come here to win and I think we’ve controlled large parts of the game. We had a couple of mistakes that weren’t like us so disappointing goals to concede. It was a catalogue of errors really, which haven’t been in our game but crept in tonight.”

The Canaries’ lead atop the league is now down to two points.

“We ended up being more open towards the end, as naturally when you’re 2-0 down you’re chasing the game,” Gibson added. “When it gets to 2-0, a game like that is tough to turn because Swansea defend very well and let us have the ball. It’s not the end of the world and we’ll bounce back well and judge it at the end of the season.”

The loss came despite winning the possession battle, 60-40. Swansea, however, had nine shots overall with four on target while Norwich had just one shot on target with 13 shots overall. They hurt themselves with two yellow cards and three offsides penalties.

“In such a tight game at this level, you have to play without mistakes,” Farke said.

Norwich are on the road next week in Championship action vs Stoke City.