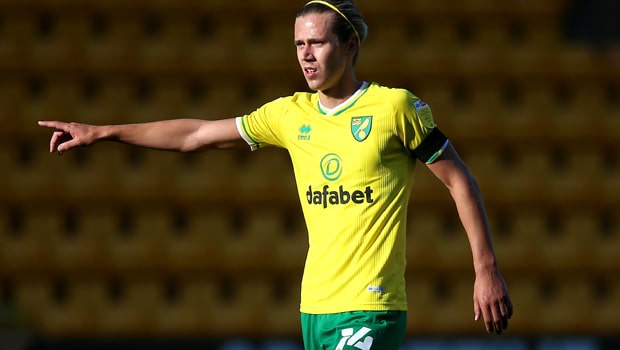 According to reports, Norwich City’s Youngster Todd Cantwell is a subject of a £25 million transfer target for Premier League side Leeds United.

The 22-year-old English midfielder was one of the few shining lights for the Canaries in a woeful 2019-20 English Premier League season that saw the team relegated.

Todd Cantwell made 37 appearances for the Canaries in the Premier League, scoring six goals, which was enough to breed interest from Leeds United.

Meanwhile, the newly-promoted Leeds United does not want to pay the asking price of £25 million for the player.

Already this season in the Championship, the England u21 player has been featured twice for Norwich City.

Leeds United will be getting an experienced player if they decide to pull the deal through as the youngster made 30 starts and 70 substitute appearances in the Premier League last season.

Leeds United team has started the season indifferently in the top flight after winning two matches, a draw, and an opening day 4-3 loss to Liverpool at the Anfield.

Marcelo Bielsa’s men sit 8th on the log with 7 points played, and they host Wolves on the 19th of October when the league resumes.

Meanwhile, for Daniel Farke’s side, the Championship return hasn’t been all rosy, either losing two and recording one win and one draw to sit 17th with 4 points.

On the international scene, Max Aarons, a subject of transfer targets, and Oliver Skipp were on display for England as the young three lions beat Turkey 2-1 to qualify for the 2021 U21 Euros championship.

Both players featured for 90 minutes in the England win that secured qualification after the draw against Andorra last week.