Krul Hoping For Another Cleansheet Against Man United 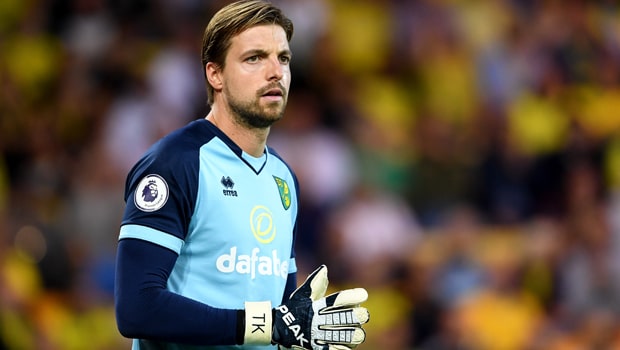 Norwich City’s goalkeeper, Tim Krul is hoping to be as influential as he was last weekend against Bournemouth in the English Premier League when the Canaries host Manchester United later on this weekend.

The Canaries ended a bad run of form which included three straight defeats to record their first away points this season at the Vitality Stadium with 0-0 draw coinciding with the return of the Dutchman from injury as he kept a clean-sheet in the game.

Tim Krul missed Norwich’s last two games due to injury but was not the only Canaries player to be out of action with the likes of Tom Trybull and Alex Tettey also returning to fitness.

Krul explained that keeping a clean sheet and not conceding was a morale booster stating that the opposite would have made the team’s morale a lot lower going into the match against the Red Devil’s.

For him, the draw was an excellent result at a time when injured players were returning to full fitness, and such results have instilled more confidence.

Meanwhile, he revealed that the team has what it takes to repeat the exciting 3-2 win over Manchester City against their fellow city rivals United.

“We got really valuable minutes for a lot of the boys, let’s create another magical night like we did against Man City.” He said.

Tim Krul wasn’t the only Goalkeeping casualty suffered by Daniel Farke’s team as second choice goalkeeper Ralf Fahrmann who stood in between the stick in the 2-0 loss to Crystal Palace also went off due to a groin injury after only 20 minutes as third choice Micheal McGovern featured for the rest of the game and in the 5-1 thrashing to Aston Villa.

However, the goalkeeper is happy with the speed of the healing of his injury claiming that a whole lot has been learnt in the past weeks.