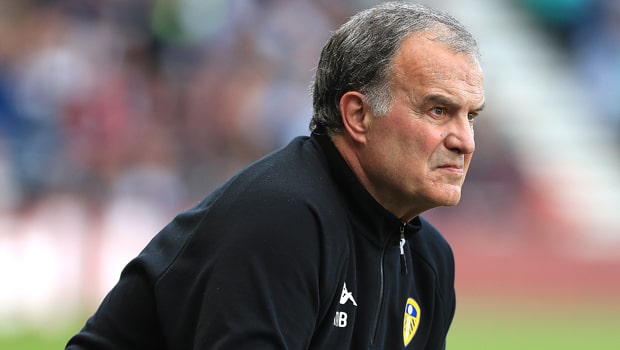 Marcelo Bielsa has suggested Leeds United came up a bit short on the pitch and in the dugout during their play-off heartache against Derby County on Wednesday.

Leeds were stunned by the Rams at Elland Road as they saw a 2-0 advantage in the tie eroded before eventually losing out 4-3 on aggregate.

The hosts took the lead on the night to go 2-0 up on aggregate when Stuart Dallas tapped in after Liam Cooper’s header had hit the post. A defensive howler allowed sub Jack Marriott to put Derby on track just before half-time.

Dallas levelled for Leeds after goals from Mason Mount and a Harry Wilson penalty had edged Derby in front, but Marriott had the final word near the end to leave an empty and all-too-familiar feeling around Elland Road.

For Leeds, who finished third in the table, defeat means their spell outside the top flight will stretch to a 16th year, while Frank Lampard’s Derby became the first team to lose the first leg of a Championship play-off semi-final at home and go on to reach the final.

Bielsa felt his side should have made more of their dominance but suggests he was powerless to halt Derby’s momentum when it mattered. “It’s a painful situation and I’m disappointed,” he said.

“We should have had one or two more in the first half and then the second half broke immediately. “We lost control. We had 20 minutes without control and I couldn’t find a solution.”

Bielsa now faces a big decision and the former Marseille coach says he’ll listen to what the club has to say before confirming what the future holds. “If the club offers me the opportunity to carry on then I will consider the proposal,” he added.

Derby are 2.25 to win promotion via the play-off final, with Aston Villa favourites at 1.62 for football’s so-called ‘richest’ game.