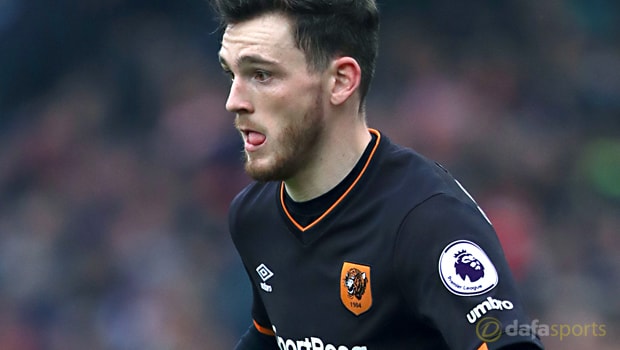 Hull defender Andrew Robertson has admitted his future with the Championship club remains uncertain but insists he is currently focused on Scotland’s international engagements.

The full-back’s stock has risen hugely since joining the Humberside outfit from Dundee United for a fee of £2.85million in the summer of 2014.

Robertson has enjoyed two spells in the Premier League with Hull and boasts 200 appearances in all competitions.

The 23-year-old’s wealth of experience backed up by a string of impressive performances has led to suggestions that he won’t be with the Tigers as they embark on a campaign back in the English second-tier.

Reports have claimed that Liverpool could be his next destination with Jurgen Klopp known to be a big admirer of his ability.

However, Robertson is currently with his national side as they gear up for this week’s World Cup qualifier with England at Hampden Park and, although he admits his future is unclear, he is keen to focus on the job in hand.

Robertson said: “The only thing I can really say is that all the players face uncertainty.

There will be people moving on but, for now, I’m just focusing on this game in front of us. I do that because it’s so massive for the country.

“All I can do is play as well as I can on the day, and I’ll worry about my future after that.

I’ll sit down after this game with the people I need to talk to, and decide if it’s right for me to stay at Hull, or if I should look to move on.

That’s not something I’m going to worry about until well into the summer.”

Scotland can be backed at 5.25 to claim a vital three points when they host England, who are priced at 1.73 to pick up a win, while the draw is available at 3.50.