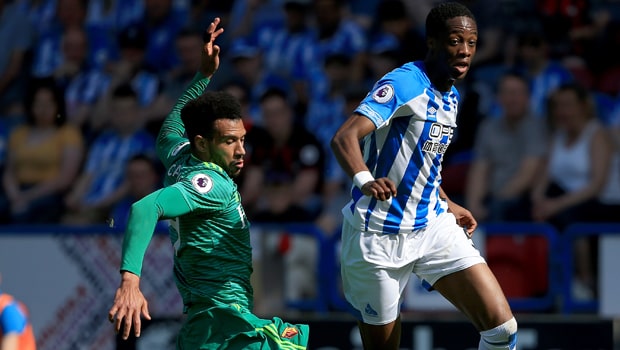 Terence Kongolo says he understands Liverpool will be expected to win Friday night’s game with Huddersfield Town but he retains faith in his team.

The Terriers, bottom of the Premier League table and already relegated back to the Championship, travel to Anfield on Friday to take on a Liverpool side looking for the three points to take them back to the top.

They were overtaken by Manchester City who beat neighbours United in midweek but Jurgen Klopp’s side look set to take the title race to the last day, as long as they seal victory against Huddersfield.

Kongolo recognised that Liverpool will be expected to get another three points but still had faith in his side to make it difficult for the Reds.

He told the club’s official website: “It’s a difficult game, they are top of the league, but I think we trained good in the last days. It’s been a tough season, but I still have faith in the team.

“The team spirit is good. Every professional footballer wants to win. We go into the game with a positive feeling and we will give everything.”

Kongolo will be expected to be in the centre of defence alongside Christopher Schindler but says he is not daunted by the prospect of facing Mo Salah, Sadio Mane and Roberto Firmino, adding: “I am a defender, I try to do my job, we do it as a whole team and we will see what the plan is for Friday.”

Huddersfield are virtually certain to finish bottom of the Premier League table at the end of the season having won just three league games all season, only scoring 20 goals in their 35 games so far.