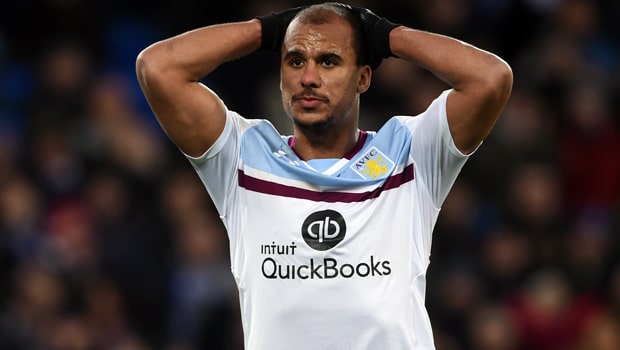 Former Aston Villa forward Gabby Agbonlahor admits he would jump at the chance to join Celtic.

The 31-year-old is currently a free agent and weighing up his future after leaving the Midlands club, where he had spent 17 years and scored a club-record 87 Premier League goals.

Agbonlahor was in Glasgow on Saturday for a charity game organised by Stiliyan Petrov and James Milner to raise money for cancer research.

He netted in the 3-3 draw and, afterwards, suggested he’d relish the chance to take to the Celtic Park turf for real.

“I think every player if they had the chance to play for Celtic would take it,” he said.

“Can you imagine playing in front of 60,000 people inside this place? “I have always thought what a great stadium this is and that it produces a magnificent atmosphere especially during Old Firm games.”

Agbonlahor has been training alone to ensure he is fit enough to take any opportunity that may come along and he suggested he would be talking to Brendan Rodgers before he departed Glasgow.

Playing in Scotland’s top flight, particularly this season, is something that he says would appeal to him.

“I will try and speak to Brendan Rodgers and we will see what happens,” he added.

“It is a tough league. If you look at the teams there is Celtic, Rangers, Aberdeen, Hibs and Hearts who all have some great players in their sides.

“If an opportunity comes for me to play in Scotland and the move is right for me and my family then I would take it.

“More people are tuning into Scottish football down south because Steven Gerrard is now the manager of Rangers. There was huge interest in last week’s Old Firm game.”